Home Congress & Federal Laws US Immigration: US On Track to Welcome 100,000 Ukrainians 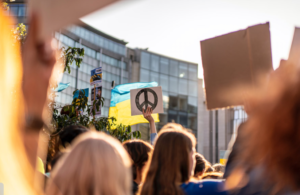 The US is reportedly on track to welcome 100,000 Ukrainian refugees, fleeing the conflict with Russia, this summer. According to official US immigration figures, 71,000 Ukrainians have already entered the US since March, meaning Biden’s pledge to receive 100,000 refugees from Ukraine is on course.

Currently, 15,000 have been welcomed into the US after being approved for sponsorship through the ‘Uniting for Ukraine’ program, according to data released by the US Department of Homeland Security (DHS).

A further 23,000 people have been approved but have not yet made the journey to the US, with travel arrangements being the responsibility of Ukrainians themselves or their sponsors. Launched in April, Uniting for Ukraine sponsors – including friends, relatives, NGOs and church groups – have applied online to support more than 60,000 Ukrainians.

Meanwhile, a report published by The Washington Post claims that approximately 1,400 new online applications to sponsor individual Ukrainians have been made. In recent years, particularly under the Trump administration, anti US immigration measures have become increasingly hostile towards migrants and refugees.

However, the US public and the Biden administration have generally been welcoming of Ukrainians. Since the conflict with Russia began on February 24, at least 12 million Ukrainians have been displaced, according to the United Nations (UN).

Of those who have fled, 5.3 million have sought refuge across Europe – including 1.8 million in the Russian Federation, 1.2 million in Poland, 780,000 in Germany and 120,000 in Spain. Approximately 7 million Ukrainians are said to be displaced in their homeland.

With large numbers of Ukrainians fleeing their country, and with no sign of Putin slowing down his military attacks, the Biden administration could be forced to increase the number of Ukrainian nationals welcomed into the US.

Most Ukrainians are arriving in the US via the Uniting for Ukraine scheme and numbers continue to rise. The majority who have entered the country have done so on existing US visas or by crossing the US-Mexico border.