Home Federal Enforcement US Immigration: ‘They’d Rather Die Than Return to Nicaragua’ 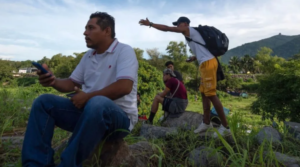 Noé was somewhere on the outskirts of the gritty southern Mexican city of Tapachula when he realised how difficult his journey to a new life in the US would be.

Just days after crossing the border from Guatemala, the meagre supplies in Noé’s small rucksack had dwindled, and he had gone with barely any food for several days as he bussed and trudged across the humid, forested landscape of Mexico’s Chiapas state, where temperatures rose to a sweltering 34 C during the day.

Already reeling from exhaustion and an empty stomach, Noé then faced another hazard: corrupt and abusive members of Mexico’s security forces, who he said repeatedly strong-armed migrants for “mordidas” – a Mexican term for “little bites”, or bribes – at roadblocks.

“Mexico was very hard,” he said. “The police were bad. They looked for people to take their things and chased us. They charged us bribes when we were already all hungry and tired”.

This, despite having paid a group of smugglers several thousand dollars for the 2,000-mile (3,332km) trip from his home on the banks of the San Juan River in southern Nicaragua through Honduras, Guatemala, and Mexico – a small fortune for a man from a country where the average income per person stands at around $1,850 (£1,533) per year.

Several weeks after his journey began, Noé – a stocky and muscular figure whose sun-beaten face and reserved demeanour makes him seem older than his 38 years – was crossing the murky green waters of the Rio Grande into Texas aboard a small rubber raft alongside migrants from as far afield as Ecuador and Colombia, including young children and their mothers.

“It was very scary,” he said. “I can swim, but the river is stronger than it looks. And it was dark.”

Safely on the US side, Noé voluntarily surrendered to Border Patrol agents. Detention came as a relief. After a few weeks, he was released into the country to wait for a court date to decide his future in the US.