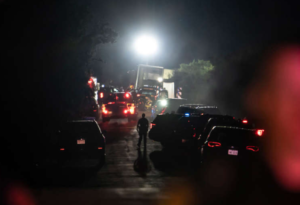 One hundred human beings were inside an 18-wheeler without water or air conditioning in the blistering 100-degree Texas heat. Fifty of them are now dead. Sixteen more people were taken to a hospital — including four children. That was this Monday in San Antonio. This is the deadliest of such tragedies in recent years, but it is not the first. In 2003, 19 migrants were found dead inside 18-wheelers in Victoria, Texas. In 2017, there were 10 migrants found dead in 18-wheelers — also in San Antonio.

Summer is the peak season of deadly state-produced violence. Anybody who has done decarceration work will tell you that summer is one of the most dreaded times for heavily policed and imprisoned communities. Summer is also when the most migration-related deaths occur.

Two hours from San Antonio, a migrant attempting to reach a local ranch for a drink of water was found dead yesterday in Kinney County, Texas. The Sheriff’s Office report states: “It’s the 5th dead illegal alien so far this year in the County.” The disregard for migrant lives has never been clearer.

The news reported heat stroke and dehydration as the main causes of death in San Antonio. Though that’s certainly what autopsies will reveal, to blame the heat or the smugglers alone would be to dishonor the human beings whose lives have been robbed by local, state and federal immigration policy. Whether related to border crossing or detention, every single migration-related death is preventable.

On Monday, Texas Gov. Greg Abbott took to Twitter to blame President Biden for the deaths. The way in which migrant lives are used as political pawns denies people basic respect and dignity, even in death. As a formerly undocumented immigrant organizer who has called Texas home for the past 20 years, I can tell you what we see from the ground: One of those men is actively trying to kill us, while the other one is leaving us to die.