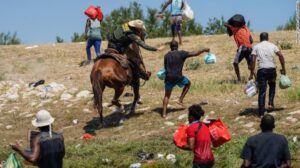 (CNN) – The parallel was striking.

Images from the banks of the Rio Grande last week depicted US Border Patrol agents on horseback, swinging long reins, as they attempted to round up Haitian migrants who sought refuge at the border. One agent could be heard in a video yelling insults at the migrants.

The scenes evoked a darker era of the nation’s history — from the 1800s, when slave patrols were used to control the movements of Black people.

But to some experts and advocates, the Biden administration’s treatment of Haitian migrants has not been surprising.

“When Black asylum seekers or Black immigrants are confronted by state power, whether it be the local police on the streets or (federal agents) … they’re confronted in a violent manner on different levels than what we see happening with migrants that are not Black,” said Nana Gyamfi, executive director of Black Alliance for Just Immigration.

For immigrant rights advocates like Gyamfi, the federal government’s policies toward Haitian migrants in recent weeks only reinforces what they have long known: Haitians and other Black migrants fare differently under the US immigration system than migrants who aren’t Black.

Some left their home country for South America more than a decade ago, fleeing a catastrophic earthquake in 2010 that killed hundreds of thousands of people and initially displaced more than a million. Those that stayed saw their already struggling nation destabilize further — since then, Haiti has never fully recovered.

This year, as the country battled a global pandemic and an acute hunger crisis, the country’s President Jovenel Moise was assassinated in July. A month later, a 7.2 magnitude earthquake killed more than 2,000 Haitians and left thousands more injured. The gang violence and poverty that Haitians were already facing got worse.

The compounding effects of those circumstances have prompted many Haitians to leave their homes in search of a better life.