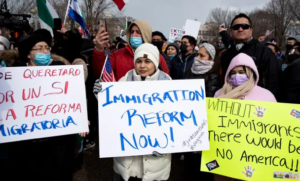 Biden ordered officials to focus on deporting immigrants convicted of felonies, rather than undocumented people en masse. I applaud that decision

The controversy reminds me of something that happened 30 years ago.

Child labor laws bar 14-year-olds from working past 7pm on school nights. Weeks before I became the US secretary of labor, in 1992, a vigilant labor department investigator discovered that the Savannah Cardinals, a Class A farm team of the Atlanta Braves, had hired 14-year-old Tommy McCoy to be their batboy. On balmy evenings extending beyond sunset, Tommy selected each player’s favorite bat and proudly delivered it to him in the batter’s box. Next morning, Tommy went to school.

The investigator threatened the team with a stiff fine. The team did what it had to do: it fired little Tommy.

Tommy liked being a batboy. His parents were proud of their son. The team was fond of him. The fans loved him. As long as anyone could remember, every kid in Savannah had coveted the job. Tommy did well in school.

But now little Tommy was out of a job.

Well, you can imagine the furor. It seemed as if the whole city of Savannah was up in arms. The Cardinals were staging a “Save Tommy’s Job Night” rally, featuring balloons, buttons, placards and a petition signed by the fans demanding that Tommy be rehired.

ABC News was doing a story on the controversy, which is how I first heard about it. ABC wanted me to do an on-camera interview that evening, explaining why Tommy couldn’t be a batboy.

By Robert Reich for the Guardian
Read full article HERE