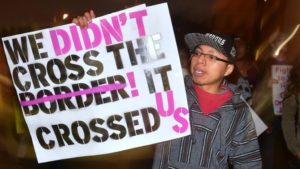 The US Justice Department is to impose quotas on immigration judges in an attempt to get cases processed faster, US media report.

Judges will be told to get through at least 700 cases a year to be given a “satisfactory” rating.

But critics warn the move could see cases rushed through without due process.

An estimated 600,000 people are waiting to have their immigration cases heard in US courts.

In its guidelines, the Justice Department says the quotas will ensure that cases are completed in a “timely, efficient and effective manner”.

But the National Association of Immigration Judges (NAIJ) told the Post that the quota system could lead to legal challenges.

“It could call into question the integrity and impartiality of the court if a judge’s decision is influenced by factors outside the facts of the case, or if motions are denied out of a judge’s concerned about keeping his or her job,” NAIJ President Ashley Tabaddor said.

The American Immigration Lawyers Association (AILA) told the Daily Beast website that judges should not be put under undue pressure to clear the backlog of cases.

“We’re very concerned that cases will be rushed through the system and due process will be circumvented with these new quotas,” AILA Senior Policy Counsel Laura Lynch said.