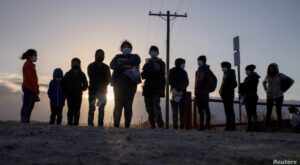 The sharply increasing number of migrants arriving at the border, including more than 170,000 in March alone, is the highest level since 2006, according to preliminary enforcement data from the U.S. Customs and Border Protection (CBP).

Only minors arriving without their parents are allowed to remain in the U.S., along with some parents with children below the age of seven. Even so, the added caseload for already overburdened immigration courts could be staggering if elevated levels of border crossings continue.

This is not the first time the United States has seen huge numbers of migrants at its southern border. It’s also not the first time immigration judges, who rule on whether asylum petitions are granted or rejected, have seen caseloads multiply.

“The backlog has grown,” said Jeffrey Chase, a former immigration judge and senior legal adviser at the Board of Immigration Appeals. He added there are two ways to handle the situation.

“The response to this usually is: Hire more judges. And I think the response should be: Let’s be smarter about who we put into court and how we prioritize the cases and how we handle the cases,” Chase told VOA.

The Transactional Records Access Clearinghouse (TRAC), a research center at Syracuse University, shows the backlog of immigration cases more than doubled since the beginning of 2017.