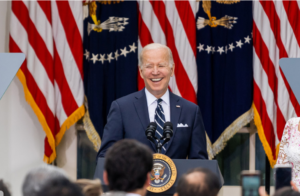 According to a report published by The Telegraph, the Biden administration has been left ‘embarrassed’ and faced ridicule from Republicans after ‘quietly agreeing’ to complete part of former US President Donald Trump’s anti-immigrant border wall in a known US immigration hotspot.

During his 2020 election campaign, Biden openly declared that ‘not another foot’ of Trump’s controversial border wall would be ‘built on his watch’. However, the Biden administration recently agreed to the completion of part of Trump’s wall in an open area of southern Arizona, near Yuma, where four exposed gaps have made the location a busy corridor for ‘illegals’.

The agreement comes amid pressure applied by Mark Kelly, an Arizona Democrat, and one of the most ‘vulnerable’ senators ahead of this year’s elections, as US immigration control continues to rank as a top priority among voters.

In a statement Mr Kelly, who has disagreed with his party over its handling of the so-called US-Mexico border crisis, said: “For too long, the Morelos Dam area has been an operational challenge for Border Patrol agents to properly secure the border and keep our communities safe.”

The Biden administration is also understood to be planning the construction of two 30-foot border barriers through San Diego’s historic Friendship Park – the southwesternmost point of the United States, where separated families have come to meet for decades, according to The Telegraph report.

Unlike many other US immigration policy decisions, this agreement is not one that has been widely publicised by the White House.

Instead, it was quietly announced by the US Department of Homeland Security (DHS), which described the work to complete the project at the Morelos Dam as a ‘measure that would protect immigrants from harm as a result of slipping, or potentially drowning, in an area of the Colorado River’.