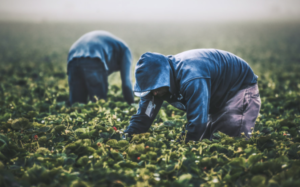 The US is currently experiencing a labour shortage, which in part has been fueled by a slump in immigration to the US. During the coronavirus pandemic, former US President Donald Trump put restrictions in place that brought immigration to the US to a halt, which almost saw United States Citizenship and Immigration Services (USCIS) collapse due to lack of funds.

In the aftermath of Trump shutting down immigration to the US, the country has since struggled with mass labour shortages. According to federal government data, it’s estimated that two million fewer immigrants have arrived in the US since the start of the pandemic, leading to a desperate scramble for workers across many industry sectors.

Industries from meatpacking to homebuilding are battling to secure workers, which is contributing to supply shortages and price rises. Economist at the University of California, Giovanni Peri, said that the ‘shortfall of two million immigrants is part of the reason for America’s labour shortage’.

Adjusting to shortages
Mr Peri said: “In the short run, we are going to adjust to these shortages in the labour market through an increase in wages and in prices.”

The lack of immigrant labour is among several reasons for America’s highest inflation rate in 40 years, which has been triggered by mangled supply chains caused by the pandemic and surging energy and commodity prices following Russia’s invasion of Ukraine.

Researcher at the Center for Immigration Studies, Steve Camarota, claims that a spike in illegal immigration to the US under President Biden will make up whatever shortfall lingers from the pandemic. Mr Camarota also argued that increases in low-paying wage sectors, such as agriculture, are ‘minor contributors to US inflation’.

“I don’t think wages going up is bad for the poor, and I think mathematically it is not possible to drive down inflation by limiting wages at the bottom,” Camarota told The Associated Press.