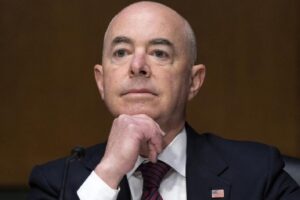 WASHINGTON (AP) — Agents with an investigative unit of the Department of Homeland Security will wear body cameras for the first time as part of a six-month pilot program that will focus on the costs and benefits of using the technology in federal law enforcement, officials said Tuesday.

The cameras will be used during the test by 55 members of the SWAT-like special response teams at Homeland Security Investigations in Houston, Newark, New Jersey, and New York, a senior official told reporters.

Homeland Security Investigations, which focuses on transnational federal crimes such as drug and human trafficking and fraud, is a component of the U.S. Immigration and Customs Enforcement, better known as ICE.

The senior ICE official, who spoke to reporters on condition of anonymity to provide details on the program before the announcement, said the agency expects later to expand the pilot to include officers who conduct immigration enforcement arrests.

The program, even though only a test, represents an expansion of the use of a technology already widely used in state and local law enforcement. In September, agents from the Bureau of Alcohol, Tobacco, Firearms and Explosives in Phoenix and Detroit became the first federal officers to wear body cams, and other agencies were expected to follow suit.

“With its body worn camera pilot, ICE is making an important statement that transparency and accountability are essential components of our ability to fulfill our law enforcement mission and keep communities safe,” DHS Secretary Alejandro Mayorkas said in announcing the program.

Special agents with Homeland Security Investigations are expected to use the body cams when carrying out such actions as making pre-planned arrests, questioning suspects and executing search warrants.

The footage could be available to defense lawyers in criminal cases as part of the discovery process as well as to a more limited degree and with restrictions to others under the Freedom of Information Act, the official said.