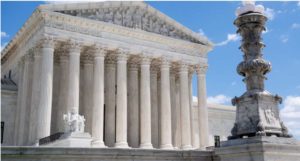 WASHINGTON – The U.S. Supreme Court on Thursday blocked the Trump administration’s yearslong effort to end a program that protects from deportation hundreds of thousands of undocumented immigrants who were brought to the United States as children.

The surprise 5-4 ruling, written by conservative Chief Justice John Roberts and joined by the court’s four liberal justices, means the program known as Deferred Action for Childhood Arrivals, or DACA, will remain in place for the foreseeable future, allowing 700,000 undocumented immigrants to live and work in the United States.

The program was created in 2012 through an executive order issued by then-President Barack Obama. DACA recipients, known as “Dreamers” and mostly from Mexico and Central America, are allowed to receive benefits such as health insurance and driver’s licenses.

But President Donald Trump, who campaigned on ending DACA and illegal immigration to the country, directed the Department of Homeland Security in 2017 to phase out the program, calling it unlawful. Legal challenges to the decision to end DACA were upheld by federal courts in several states, prompting the administration’s appeal to the high court.

Writing for the majority, Roberts said the administration’s decision violated the federal law that governs administrative agencies and failed to consider DACA recipients’ rights to protection from deportation.

“We do not decide if DACA or its rescission are sound policies. We address only whether the agency complied with the procedural requirement that it supply reasoned explanation for its action,” Roberts wrote.