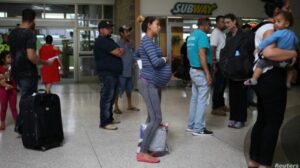 The Biden administration announced Friday that it would mostly avoid detaining undocumented immigrants who were pregnant, nursing or in postpartum.

U.S. Immigration and Customs Enforcement (ICE) released a statement Friday saying the policy recognized the time needed for infant development and parental bonding. It reversed a 2017 Trump-era rule that allowed officials to detain immigrants in those specific situations.

Acting ICE Director Tae D. Johnson said in a statement that pregnant women and those who just gave birth have “unique needs” and ICE would not detain them unless “release is prohibited by law or exceptional circumstances exist.”

“This reflects our commitment to treat all individuals with respect and dignity while still enforcing our nation’s laws,” said Johnson.

Under the Obama administration, ICE generally spared pregnant women from immigration detention. With Friday’s statement, the Biden administration goes a step further to include not only women who gave birth within the prior year but those who are breastfeeding, which can often last more than a year.

Immigration advocates welcomed the announcement but noted the directive distinguishes between the deportation process and the criminal process for immigration-related crimes, which means pregnant women can still be detained in some limited circumstances.

Eunice Cho, senior staff attorney with the National Prison Project of the American Civil Liberties Union, said in a statement that the announcement was a “step in the right direction,” but that there was still a need for “robust oversight of detention facilities.”

“This move brings us closer to more humane treatment by ICE of people who are pregnant, postpartum or nursing,” Cho said.

In Friday’s statement, ICE said, “In the very limited circumstances in which detention is necessary and appropriate, ICE provides general health and well-being care, including regular custody and medical reevaluation, ensuring appropriate pre- and/or post-natal, and other medical and mental health care.”