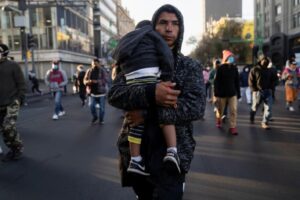 The number of H-2B visas will increase by 20,000, including 6,500 for Central America and Haiti, as migration spikes.

The United States is expanding its guest worker programme with an additional 20,000 visas available for seasonal, non-agricultural guest workers, as the number of migrants hoping to enter the country spikes at its southern border.

The extra H-2B visas would be in addition to the annual allotment of 66,000 visas for the fiscal year, a US official told the Reuters news agency on Monday. A formal announcement on the increased number, including 6,500 visas for workers from Guatemala, Honduras, El Salvador and Haiti through March 31, is expected later in the day.

The expansion of the H-2B visa programme, used to employ landscapers, housekeepers, hotel employees and construction and carnival workers, among others, comes as the US labour market continues to face shortages during the COVID-19 pandemic.

The White House has touted efforts to create legal pathways for migrants to come to the US as record numbers of migrants have been arrested at the southern border under the administration of President Joe Biden.

Even if all 6,500 visas are used, this represents just a fraction of the migrants trying to reach the US. US Border Patrol arrested more than 700,000 migrants from those four countries in the fiscal year 2021.

The additional 20,000 visas are a slight drop from the 22,000 made available for the second half of the fiscal year.

The Biden administration earlier this month struck an agreement with the Mexican government to reinstate a controversial Trump-era policy that forced asylum seekers to wait in Mexico for their US court hearings.

The US Department of Homeland Security said the Migrant Protection Protocols (MPP), dubbed “Remain in Mexico”, restarted on December 6. Once it is again fully operational, the programme will see people returned to Mexico via seven border crossings in the US states of California, Arizona and Texas.