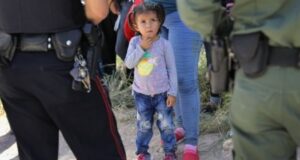 The number of foreign-born people living in the US has risen by about 3% from 43.7 million the year before Mr Trump’s election to about 45 million last year.

But this rise conceals a big shift in the largest group by far within this population – those who have moved to the US from Mexico. Having remained at nearly the same level for years, the number of people living in the US who were born in Mexico has fallen steadily since Mr Trump’s election.

While this dip was more than offset by an increase in the number of people who have moved to the US from elsewhere in Latin America and the Caribbean, demographers at the US Census Bureau have estimated that net migration – the number of people moving to the US minus those moving out of the US – has fallen to its lowest level for a decade.

This is partly due to lower levels of immigration, but also because more people who were born outside the US are moving back overseas, according to Anthony Knapp of the US Census Bureau.

Beneath this trend there are some important changes to the visa system.

Mr Trump has allowed more people to come to the US temporarily for work, but made it harder for people to settle permanently in the US. The reduction in permanent visas, from about 1.2 million in 2016 to about 1 million in 2019, has primarily affected family members of US citizens and residents hoping to join their relatives, with the number of permanent visas sponsored by employers largely unchanged.

Although more people are affected by this, in percentage terms his most significant change to immigration policy has been to lower the number of refugees admitted to the US.

The number of people admitted to the US as refugees each year is determined by a system of quotas, the size of which are ultimately defined by the president.