Home Federal Enforcement US Detains Yet Another Immigrant Rights Activist 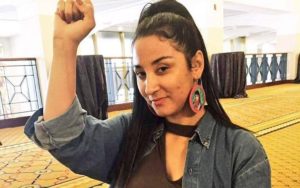 The US has detained yet another immigrant rights activist. In recent months, US authorities have detained, initiated deportation proceedings against, and deported several immigrants’ rights activists including a green card holder and a “Dreamer.”

Last week, Alejandra Pablos, a field coordinator for National Latina Institute for Reproductive Health, was detained after a routine check in at the US Immigration and Customs Enforcement (ICE) field offices in Arizona.

Pablos has lived in the US since she was a small child, and her mother and most of her family are US citizens. She has filed for asylum because she says she fears persecution in Mexico for her US political activities. As an activist, Pablos’s work reflects the reality that immigrant rights and reproductive justice are intertwined, organizing Latinxs to change policies that harm women’s health and their families.

Her immigration status has been in jeopardy since she was convicted of driving under the influence in 2012. After she served time in both prison and immigration detention, Pablos was released, but ordered to check in with ICE every three months. It was during one of these routine check-ins that she was sent back into detention.

Given her long US residence and family ties, Pablos’ detention and the inherent threat of deportation is deeply concerning. US immigration law generally fails to take adequate account of immigrants’ ties to this country in weighing whether the government has a sufficient reason to deport people. There is currently an ongoing campaign petitioning for Pablos’s release.

In recent months, ICE has arrested and deported several immigrants’ rights activists. Ravi Ragbir, a former green card holder from Trinidad and the head of the New Sanctuary Coalition (NSC), was arrested in New York City. Jean Montrevil, an immigrant from Haiti who also worked at NSC, was deported – despite having lived in the US for over three decades with his four US-citizen children. Daniela Vargas, a Mississippi “Dreamer” brought to the US as a child from Argentina, was detained minutes after speaking about her experience at a press conference. Maru Mora Villalpando, a high-profile undocumented activist from Mexico, was served with deportation papers in December.