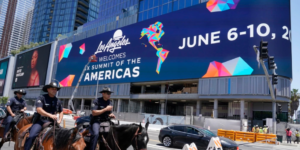 The United States announced Tuesday several government and private sector initiatives meant to boost development and safety in Central America as part of a program designed to address the root causes of why people migrate to the U.S.

Vice President Kamala Harris has been leading the initiative, which included meeting with business leaders late Monday ahead of announcing $1.9 billion in new private projects from 10 businesses and organizations.

The announcements come as the United States hosts leaders for the Summit of the Americas this week in Los Angeles, but with notable exceptions.

The United States did not invite Cuba, Nicaragua or Venezuela to participate, with White House press secretary Karine Jean-Pierre telling reporters Monday, “We do not believe that dictators should be invited.”

In response, Mexican President Andrés Manuel López Obrador said he would not attend, sending his foreign minister instead. Honduran President Xiomara Castro is also staying home after saying she would only attend the summit “if all the countries of the Americas are invited without exception.”

Guatemalan President Alejandro Giammattei said he would be focusing on work in Guatemala instead of taking part in the summit.

Mexico, Honduras and Guatemala, along with El Salvador, are key U.S. partners in the effort to address migration. A senior U.S. administration official told reporters Monday that even if their leaders do not attend, those countries “will fully participate in the summit,” and that the absences do not undermine the U.S. approach to the region.

Among the new efforts Harris announced Tuesday, which follow $1.2 billion in similar commitments made public in December, are clothing company GAP’s move to source an additional $50 million in products from Central America and auto components producer Yazaki’s announcement of $110 million to hire 14,000 workers in the region.

Digital service firm COATL is investing $35 million to expand high speed internet access in El Salvador, while Millicom is launching a $700 million expansion and maintenance program for its network in El Salvador, Honduras and Guatemala.