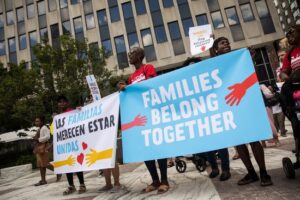 The Biden administration’s family reunification task force said on Wednesday that its identified thousands of unreviewed files that could possibly reveal even more separations at the southern border by the previous administration, NBC News reports. “The official said the new files may reveal ‘a few additional families’ who have not yet been identified.”

President Joe Biden’s federal task force said the unreviewed files total 5,600, and are dated from the first day of the previous administration through July 2017. This, the NBC News report said, is “a time period not included in the American Civil Liberties Union’s lawsuit against the Trump administration over family separations.”

Lee Gelernt, the American Civil Liberties Union’s (ACLU) lead attorney in the ongoing litigation over family separation, said advocates “told the court we would need to go back to the government if we suspected that there may have been families separated as far back the first six months of the Trump administration,” the report continued.

“We now believe there may have been separations in the first six months of the Trump administration and we applaud the task force for agreeing to review cases during this time period,” Gelernt continued in the report. “Whether the task force finds one or many additional separations, it is essential that we find every last child cruelly taken from their parents by our government.”

The ACLU said in late 2019 that 5,460 children were stolen at the southern border by the previous administration before, during, and after the official family separation policy. “The government identified 2,814 separated children who were in government custody on June 26, 2018,” NBC News reported at the time.

But while Judge Dana Sabraw ordered a stop to the policy that month, border officials exploited a loophole in his ruling and stole an additional 1,090 kids, sometimes based on outright lies, including falsely accusing parents fleeing gang violence of being gang members themselves. One such parent, Adolfo, was separated from his two children based on this lie for 184 days. The ACLU then said that 1,556 kids were stolen beginning in July 2017, months before any policy was officially implemented the following spring.