Home Resources Undocumented Immigrants Can Get Licenses. ICE Can Get Their Data. 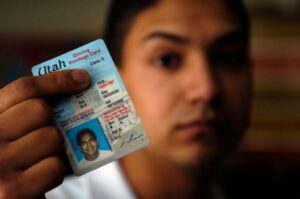 As Mayra Raymundo drives to work each evening, she obsessively checks her rearview mirror. She’s terrified a cop will pull her over and find out she doesn’t have a driver’s license or car insurance. She would have to admit she is undocumented, risking deportation to Guatemala.

Raymundo, 31, works nights cleaning a private school outside Providence, Rhode Island. She earns $11.50 an hour. Without a car, Raymundo said she can’t earn a living to support her two young daughters.

“Basically, if you have a car, you can find work. If not, then no,” said Raymundo, adding that she could land a job that pays $15 an hour if she had a driver’s license. “Without a license, I live in constant fear.”

Raymundo and two of her co-workers, also undocumented, said they prayed for state lawmakers to approve a bill that would allow them to obtain licenses. Rhode Island legislators have tried to pass this bill for more than 10 years.

Sixteen states, plus Puerto Rico and Washington, D.C., allow undocumented immigrants to receive driver’s licenses or similar IDs known as driving privilege cards, eliminating the chance of arrest for driving without a license, a common fast-track to deportation. More places are considering this approach, as research shows earlier adopters reduced the likelihood of hit-and-run accidents, lowered insurance costs for drivers, increased the number of insured motorists on roads and improved poverty rates.

But immigration authorities are using driver’s license data to find the very people who are supposed to benefit from the new laws.

At least seven states have shared personal information from drivers with U.S. Immigration and Customs Enforcement since January 2020, according to a Center for Public Integrity investigation. Sometimes, immigration agents will ask motor vehicle agency staff to run a facial recognition search to match a provided photo. Other times, they seek addresses and driving records for specific people.