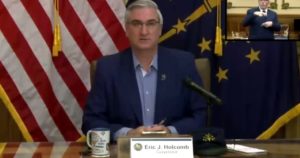 For weeks, Wendy Catalán Ruano watched her uncle struggle to find ways to provide for his children after his hours were cut at the warehouse where he worked.

Days later he was laid off.

Catalán Ruano’s friends, Mari Luna, 21, and Dara Marquez, 27, were seeing a similar story repeating for their family members and friends, too.

The three women are Deferred Action for Childhood Arrivals (DACA) Obama-era program recipients. They were brought to the U.S. from Mexico as infants by their parents. Indiana has been their home since. They belong to mixed-status households, which means some of their family members are U.S. citizens and some are undocumented.

DACA recipients are able to work legally in the U.S., pay taxes, and in Indiana, they qualify for state unemployment insurance, though not federal aid. But many of their friends and family who are undocumented do not qualify for any state or federal aid or any COVID-19 relief.

To help them, they joined forces with several other young Hoosiers, many of them DACA recipients, too, and created the Undocumented Hoosier Support Fund for families in need.

“People like my uncle and others in my family don’t have a back-up. There are no other options,” Catalán Ruano, 23, of Indianapolis said. “He’s the breadwinner and I can only imagine what they must be going through when they don’t have anything to lean on.”

The fund was also created with the help of volunteers from organizations such as the Indiana Undocumented Youth Alliance (IUYA); immigrant-led movement and activist group Cosecha Indiana; and student-led groups Proyecto Siembra, and the IUPUI-based group, Dreamers Alliance: United as One.

In about three weeks, the group raised more than $27,000 and received an additional $35,000 grant from the Central Indiana Community Foundation.