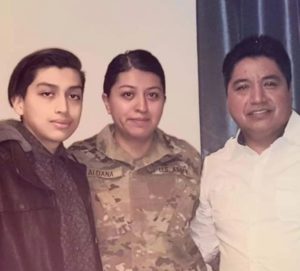 Angel Aldana had come a long way since he arrived in the United States more than two decades earlier.

The Mexican immigrant from Birmingham found himself outside the White House – as close as he’d ever come to the seat of American power. Yet he felt further from it than he ever had before. Aldana’s daughter had invited him to attend a 2016 Cinco de Mayo celebration. Armed with an invitation from President Barack Obama himself, she asked her father along as her guest.

But Aldana worried about his status as an undocumented immigrant.

“I thought, maybe when they check my background, they say you are in proceedings so you cannot go, or you are not documented so you cannot go,” Aldana said. “I was sad, but at the same time I said let my son go. I stayed outside at the dinner.”

This week, those worried became a thing of the past after an immigration judge in Atlanta ruled the 49-year-old should be allowed to remain in the country. The rare cancellation of removal – a kind of Hail Mary of legal arguments – only succeeds in 1 to 2 percent of cases.

“I feel free, like they’ve taken a lot of weight and uncertainty from me,” Aldana said.

That relief only happened because of all the bad breaks that came before, the heartache, illness and graft that tested Aldana’s character but never seemed to break it. The long journey began in 1991, when he traveled from Hidalgo, Mexico to Arizona in search of a better life.

After a few years as a farm laborer, Aldana moved to Birmingham and found work in Chinese restaurants. The owners offered housing to immigrant workers, who often found themselves shut out of the rental market.

He settled in Birmingham and fell in love with a woman who was also from Hidalgo. They had two children together but, after 10 years, the relationship fell apart. Aldana took custody of both children, a boy and a girl.