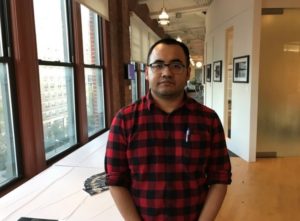 In 2012, Marco Saavedra hatched a dramatic plan with activists at the National Immigrant Youth Alliance. He and another undocumented immigrants would deliberately get themselves detained in South Florida by approaching a Customs and Border Protection station, claiming they were looking for relatives and then acknowledging they had no papers.

It worked and each was sent to detention. Once inside, they helped connect many immigrants with attorneys. They’d already been doing this kind of work from the outside but wanted to go a step further.

“The idea was like in order to escalate, why not just take on a whole detention center and maybe treat it as an entire caseload and not just an individual case-by-case basis,” Saavedra explained.

Infiltrating the detention center was the first in a series of steps that led the U.S. government to seek to deport Saavedra. On November 7th, his case will be heard by an immigration judge in New York City.

Born in Oaxaca, Mexico, Saavedera was three years old when he and his parents crossed the border illegally in Arizona. He was raised in New York City and won a scholarship to Kenyon College in Ohio as a foreign student (he had trouble getting into other universities because of his status). While in college, during President Barack Obama’s administration, he began protesting for passage of the DREAM act, to help undocumented young people like himself stay in the U.S.

But getting deliberately detained took his political work to another level. While inside, he claims he helped about four dozen people get released from the detention center in Broward, Florida, before authorities figured out who he was and released him. But that put him on the government’s radar and he said he was placed in removal proceedings.

That same year, President Obama enacted Deferred Action for Childhood Arrivals (DACA) to protect undocumented immigrants from deportation if they were brought to the U.S. as children, and let them get work permits. Obama took this action after Congress failed to enact the DREAM act, which would have given these young people a path to permanent status. Saavedra still wasn’t assuaged.

“Although we had achieved such a monumental victory for, you know, now 700,000 DACA beneficiaries, there are still 11 million undocumented people in this country that don’t have access to a work permit” or a drivers license. And they have to reapply for DACA every two years.