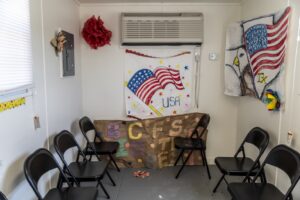 While a Trump-era order to expel anyone crossing the border remains largely in effect, the new administration has allowed such minors to enter the country.

The Biden administration insists that what is happening on the southern border is not at all like what happened during the Trump administration. At her daily press conference on Tuesday, White House Press Secretary Jen Psaki made this distinction: “We have a number of unaccompanied minors—children—who are coming into the country without their families. What we are not doing—what the last administration did was separate those kids, rip them from the arms of their parents at the border.”

In 2018, the Trump administration instituted a “zero-tolerance policy” that purposefully separated children from parents when they were caught crossing the border illegally, citing a wish to deter families from doing so. In a January 2019 study, HHS found that at least 2,737 children were separated from their parents. However, because of a lack of data and other complexities, that number may be much higher. Instead of deterrence, though, what resulted was a massive public outcry and, ultimately, a withdrawal of the policy from the Trump administration in June 2018.

By Ryan Brown for THE DISPATCH
Read Full Article HERE