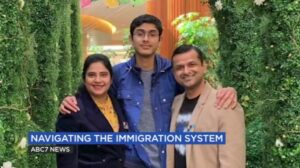 If TJ is forced to leave America, he would not get to complete his senior year at Cal.

SAN FRANCISCO (KGO) — ABC7 News was introduced to the Chauhan family in 2019. Parents, Sudhir and Punita, were beaming as their son TJ moved into his freshman dorm at UC Berkeley. The family is from India, has lived in America since 2013, but now has hit a major snag with the U.S. immigration system.

“It’s very difficult to put into words,” Sudhir said. “I try to keep myself positive.”

Sudhir works for a private consulting firm and has an H1B visa. It’s popular among international workers. His wife Punita and son TJ have H4 visas, which are issued for dependent family members, and don’t allow them to work in the U.S.

TJ is a junior chemical engineering major at CAL and needs an internship to help remain competitive with classmates and land a job after graduation.

“You know it feels really bad to see that despite him putting in all his efforts, there are some circumstances that are beyond everyone,” Sudhir said. “No one can really help until the immigration is taken care of.”

TJ needs his H4 visa converted to an F1 visa. The family submitted the paperwork for the change in July of 2020.

“A process that usually takes around 6 to 7 months is still underway right now as we speak,” Sudhir said. “So, it’s like more than a year now.”

“Unfortunately, this happens to a lot of people and it’s been happening more in I think the last several years,” Ann Block, senior special projects attorney at the Immigrant Legal Resource Center (ILRC), said. “It was clear that the last administration wanted to decrease immigration to our country. Our immigration laws are broken.”

Block said COVID made the existing immigration backlog in the U.S. much worse.