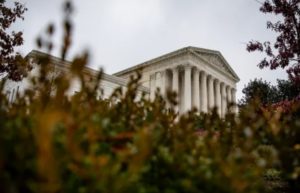 Nearly 650,000 undocumented “Dreamers” are awaiting a decision from the Supreme Court that will determine whether they will be allowed to continue to receive temporary protection from deportation and work permits under an Obama-era program called Deferred Action for Childhood Arrivals that President Donald Trump wants to end.

The Supreme Court’s decision on DACA is expected to be announced by the end of June but could come any day.

Trump tried to end the DACA program in September 2017, saying that the program was an overreach of former President Barack Obama’s executive authority.

But Trump’s effort to rescind the program was stymied by a flurry of lawsuits by DACA advocates who argue the program is legal and that the Trump administration improperly tried to end it without adequate consideration of the disruptions it would create in the lives of DACA recipients and others.

When will the Supreme Court announce a decision?

It’s impossible to predict exactly when the Supreme Court will announce its decision on the DACA program. Analysts and court-watchers speculate that the ruling on DACA may be one of the last decisions the Supreme Court announces near the end of June, when the high court’s session ends.

In the meantime, U.S. Citizenship and Immigration Services will continue to accept applications for renewal of 2-year deportation protections and work permits after lower courts issued preliminary injunctions blocking the Trump administration from ending the program.

What is at stake?

There were approximately 649,070 active DACA recipients as of Dec. 21, 2019, according to the most recent USCIS data.

That is down from the more than 825,000 people who have been approved for DACA since the program started in 2012.

The number has declined because some undocumented immigrants who were approved for DACA have been able to legalize their status, others decided not to renew and others became ineligible, said Veronica Garcia, a special projects attorney at the Immigrant Legal Resource Center, an advocacy group.