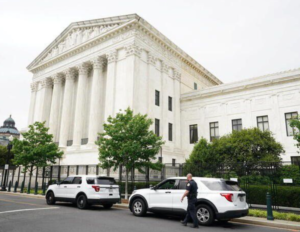 The unsigned one-sentence ruling “dismissed as improvidently granted” an appeal by 13 Republican state attorneys general led by Arizona’s Mark Brnovich seeking to defend the rule in court after Democratic President Joe Biden’s administration refused to do so and rescinded it. The rule widened the scope of immigrants deemed likely to become a “public charge” mainly dependent on the government for subsistence.

The state attorneys general had hoped to ask lower courts to throw out decisions that sided with various challengers to the rule, including a number of Democratic-led states.

Biden’s administration in February proposed a new public charge rule that it called more “fair and humane.” It would avoid penalizing people for seeking medical attention and other services.

Trump’s rule was in effect from February 2020 until Biden’s administration rescinded it in March 2021, acting on a decision in a separate legal case in Illinois that vacated the rule nationwide. Republican state officials also sought to intervene in that case in their uphill battle to revive Trump’s rule.

U.S. guidelines in place for the past two decades had said immigrants likely to become primarily dependent on direct cash assistance or long-term institutionalization, in a nursing home for example, at public expense would be barred from legal permanent residency, known as a “green card.”

Trump’s policy expanded this to anyone deemed likely to receive a wider range of even non-cash federal benefits such as the Medicaid healthcare program, housing and food assistance for more than an aggregate of 12 months over any 36-month period.

The San Francisco-based 9th U.S. Circuit Court of Appeal decided in 2020 that Trump’s policy impermissibly expanded the definition of who counts as a “public charge” in violation of a federal law called the Administrative Procedure Act. Other courts made similar rulings.