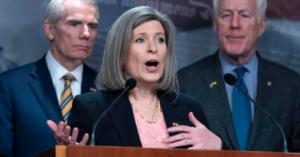 U.S. Sen. Joni Ernst, R-Iowa, called for a return to Trump-era border policies in a press conference with other Republican senators on Wednesday.

Ernst was among Republican senators led by Sens. John Cornyn and Ted Cruz, R-Texas, on a visit to the U.S. southern border last week, where the senators joined Customs and Border Protection agents and law enforcement on various duties.

The senators slammed President Joe Biden’s administration for changes made to border enforcement, including Biden’s lifting of former President Donald Trump’s “remain in Mexico” policy, which forced U.S. asylum seekers to stay in Mexico while their cases were resolved in U.S. immigration courts. The U.S. Supreme Court greenlit Biden’s decision to lift the policy in a late-June decision after it was blocked by a federal judge.

Ernst called the situation on the visit “infinitely worse” than what she’d encountered on previous visits to the border.

She criticized President Joe Biden’s implementation of Alternatives to Detention policies, which allow migrants to be released from detention while they await immigration court proceedings.

“This administration continues to encourage these dangerous journeys with their catch-and-release, open-door border policy,” she said.

Ernst and U.S. Sen Chuck Grassley, R-Iowa, called for scrutinization of alternatives to detention policies this week. The American Civil Liberties Union contends the policy is more humane and cost-effective compared to detention.

Encounters with migrants at the southwest border reached a record high in May with more than 240,000 encounters, according to the Department of Homeland Security, and they fell slightly in June. Encounters have been higher this fiscal year than the previous three years, according to the department’s data.

Senators at the press conference also criticized Biden’s attempt to lift Title 42, a public health measure put in place by Trump allowing border agents to quickly expel migrants, including asylum seekers. A Louisiana judge blocked Biden from lifting the rule in May.