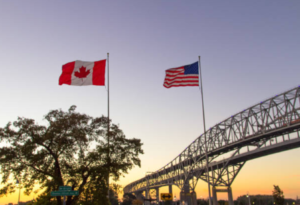 Mezyad AlMasoud holds two master’s degrees and is the CEO of a company that manages money for professional athletes. He is also one of the highly-skilled immigrants forced to leave America because of immigration reforms in 2017.

AlMasoud had wanted to go to America since he was a child growing up in Kuwait.

“I had been loving the U.S. (I watched) NBA football, and I’m a big fan of many of the musicians of course,” he told CIC News.

In 2015 he moved to America with a temporary visa called the Optional Practical Training (OPT). He then started his company, Flair Inc. a year later in 2016.

At the time, AlMasoud could count on an Obama-era immigration program called the International Entrepreneur Rule (IER) to allow him to stay in the U.S.

However, in 2017, President Donald Trump’s administration moved to rescind the IER program. AlMasoud was told he would have to leave the country.

“It was a very sad moment for me,” AlMasoud said. “I was kind of confused and I didn’t know what to do next, and that’s when I started thinking about other opportunities.”

Data from the 2016 U.S. presidential election onward also show that more and more temporary skilled worker petitions for new employment, known as the H-1B, are being denied to foreign workers in the U.S.

The rates have shot up from six per cent in 2015 to 32 per cent in the first quarter of 2019, according to the National Foundation for American Policy.

Meanwhile, it’s a different story in Canada, where federal and provincial programs are opening their doors to the international tech talent like AlMasoud.

The number of employees in the professional, scientific, and technological sector rose by 4.5 per cent between 2017 and 2018, according to Statistics Canada, and immigration is expected to be an important element of labour force growth over the next two decades.

It was a friend from business school who suggested that AlMasoud should move to Canada. He applied for the Entrepreneur Start-up Visa Program and his application was processed in about a month, he said.