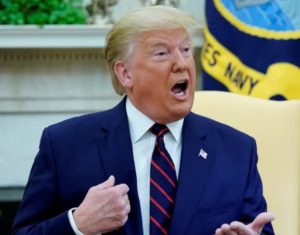 MIAMI – U.S. ambassadors from El Salvador, Honduras and Haiti sent urgent cables to the White House in the early days of the Trump administration, pleading with them to abandon plans to send hundreds of thousands of migrants back to their home countries.

The cables, made public Thursday, expose the divide between career diplomats and a new administration eager to push through major hard-line immigration policies even as it apparently weighed possible fallout on the 2020 presidential race.

Facing legal challenges, the Trump administration later backed down from its hard-line position and last month it extended protections for at least a year as U.S. courts work through the disputes.

The internal State Department memos are contained in a report by Senate Democrats that sheds light on diplomats’ alarm ahead of the 2017 decision by the Trump administration to end protections for some 400,000 Central Americans and Haitians living legally in the U.S.

The report suggests that, for the Trump administration, concerns about mass removals of people taking place during the 2020 presidential campaign prevailed over national security warnings from top U.S. diplomats.

The apparent injection of electoral politics in what was supposed to be a policy decision about humanitarian protections for migrants from some of the Western Hemisphere’s poorest and most violent countries came from then-Secretary of State Rex Tillerson’s policy planning staff, comprised of political appointees.

It contrasts with the recommendations of U.S. embassies in the affected countries — El Salvador, Honduras and Haiti — as well as the State Department’s most-senior career diplomat at the time, then-Under Secretary of State for Political Affairs Thomas Shannon. He argued unsuccessfully that taking away so-called temporary protected status, or TPS, for the migrants would destabilize the region and damage the U.S. standing in Latin America and the Caribbean.

Nonetheless, the unclassified cables, some of which have surfaced in court battles, provide telling insight on how career officials and political appointees haggled over policy recommendations in the early days of the Trump administration, when the new president’s toughened stance on migration went against, in the case of TPS, decades of bipartisan consensus.