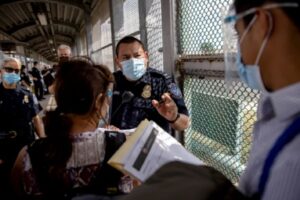 The Biden administration has faced an uphill battle trying to end the policy, which forces asylum seekers to wait in Mexico while their cases are processed in the U.S.

A U.S. appeals court on Monday rejected a renewed attempt by the Biden administration to end a policy put in place by former President Donald Trump that forced tens of thousands of migrants to wait in Mexico for the resolution of their U.S. asylum cases.

President Joe Biden, a Democrat, scrapped his Republican predecessor’s policy — often referred to as “Remain in Mexico” — soon after taking office in January this year. But after Texas and Missouri sued over the rescission, a federal judge ruled it had to be reinstated.

Under the 2019 policy, officially called the Migrant Protection Protocols (MPP), migrants seeking asylum must wait weeks and sometimes years in Mexico for a U.S. court date instead of being allowed to await their hearings in the United States.

Biden decried the policy on the campaign trail and immigration advocates have said migrants stuck in dangerous border cities have faced kidnappings and other dangers.

The Biden administration re-issued a memo terminating MPP in the hopes it would overcome the legal challenges. But the conservative-leaning 5th U.S. Circuit Court of Appeals was not convinced by the new memo.

In a Monday night ruling, the court said the U.S. Department of Homeland Security (DHS) “claims the power to implement a massive policy reversal — affecting billions of dollars and countless people — simply by typing out a new Word document and posting it on the internet.

“DHS has come nowhere close to shouldering its heavy burden to show that it can make law in a vacuum,” the judges wrote in a 117-page opinion.

The White House and the U.S. Department of Justice did not immediately respond to a request for comment.