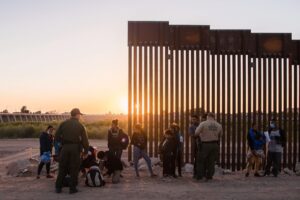 After a fast-tracked screening at the border, the United States can turn back families it determines do not qualify for asylum. Immigration advocates say the decision denies due process.

LOS ANGELES — The Biden administration announced late Monday that it would begin swiftly removing migrant families that immigration officials determined did not qualify for asylum after an initial screening at the southwestern border.

The policy, known as expedited removal, is a return to a measure that has been used by Democratic and Republican administrations to deter unauthorized immigration. Asylum officers interview families in a fast-tracked screening process to determine if they have a “credible fear of persecution.”

The Biden administration has been struggling to cope with an influx of unauthorized arrivals that shows few signs of abating.

“Expedited removal provides a lawful, more accelerated procedure to remove those family units who do not have a basis under U.S. law to be in the United States,” the Department of Homeland Security said in a statement.

Under an emergency order issued by the Centers for Disease Control and Prevention during the coronavirus pandemic, the Biden administration has had the authority to expel to Mexico any migrants who show up at the border without a visa.

But the government of some Mexican border states have refused to accept families with young children or those who have traveled from countries outside Central America, such as Brazil, Ecuador, India and Venezuela.

Human smugglers in recent months have funneled tens of thousands of families to the Rio Grande Valley in Texas and to parts of Arizona and California — places where they are aware families will be admitted — because Mexican states like Tamaulipas and Baja California are not taking them back.

Details of how expedited removal will be carried out were not immediately available, but it could potentially be applied to certain cohorts of families, depending on their country of origin or the age of the children, or along only certain stretches of the border.