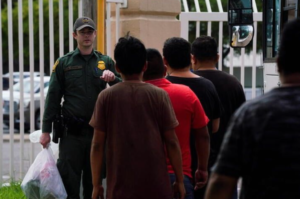 (Reuters) – A U.S. appeals court on Wednesday ruled that a federal law making it a crime to “encourage or induce” non-U.S. citizens to enter or reside in the country illegally is unconstitutional because it could penalize free speech.

The 10th U.S. Circuit Court of Appeals in a 2-1 decision said the law, which is part of a broader statute barring human smuggling, criminalizes “vast amounts of protected speech” such as urging family members to remain in the U.S. after their visas expire or informing non-citizens about available social services.

“Although impossible to quantify with exact precision, these commonplace statements are likely repeated countless times across the country every day,” Circuit Judge Nancy Moritz wrote.

The court affirmed a Kansas federal judge who had dismissed indictments accusing two men of violating the law by helping to operate a scheme to employ immigrants in the U.S. illegally in construction jobs.

The U.S. Department of Justice did not immediately respond to a request for comment. Nor did lawyers for the defendants, Mauro Papalotzi and Jose Felipe Hernandez-Calvillo.

The law imposes criminal penalties on anyone who “encourages or induces an alien to come to, enter, or reside in the United States, knowing or in reckless disregard of the fact that such coming to, entry, or residence is or will be in violation of law.”

Wednesday’s ruling creates a split with the 4th Circuit, which upheld the law in the 2011 case United States v. Tracy. In an unpublished opinion, the court said the law could infringe on defendants’ free-speech rights in particular cases, but was not overly broad on its face.

In the 2018 case United States v. Sineneng-Smith, the 9th Circuit said the law was unconstitutional. But the U.S. Supreme Court vacated that ruling two years later, finding that the 9th Circuit did not have the authority to address the issue because the defendant in that case had not raised it.