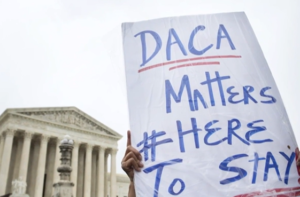 The centerpiece of former President Donald Trump’s immigration plan — the infamous wall on the border with Mexico — never came to pass. But the physical wall was never the only component of his war on immigrants. He and his staff still managed to erect an intangible dam of sorts at the border, constructed out of a slew of policies meant to hinder, discourage and otherwise bottleneck the progress of hundreds of thousands of migrants seeking to legally settle in the United States.

Since Joe Biden took office, his administration has been faced with a choice: Dismantle the blockages Trump erected in favor of either a new system or the pre-Trump status quo; or maintain the dam out of fear of what would happen if it came down. That this has even been a question for Biden and other Democrats shows that Trump’s most lasting policy legacy was his assault on legal immigration.

Trump and his main immigration policy adviser, Stephen Miller, spent four years crafting as many ways as possible to limit immigration, from the so-called “Muslim travel ban” to the “Remain in Mexico” policy. Under the latter, applicants for asylum in the U.S. — which is protected under domestic and international law — were forced to await their immigration court hearings in Mexico rather than the United States.

“Remain in Mexico” was implemented in 2019, the same year Trump’s administration issued the “third-country asylum rule,” which denied entry to asylum applicants who hadn’t applied for asylum in any of the countries they’d passed through on their way to the U.S. The backlog these policies created were only exacerbated by the Covid-19 pandemic and the use of Title 42, a public health rule Trump created that lets the U.S. immediately turn back asylum at the border.