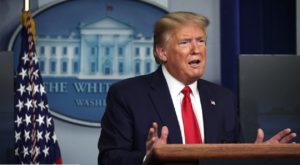 President Donald Trump’s announcement that he would soon suspend immigration into the U.S. surprised his own officials and likely overstated the extent of the still-developing executive order.

Already, much of the immigration flow into the country has been paused during the coronavirus pandemic, as the government has temporarily stopped processing all nonworker visas. And, according to three industry representatives familiar with the decision, the upcoming ban will exempt seasonal foreign farmworker visas, one of the largest sources of immigration at the moment.

The Department of Homeland Security is still drafting the plan, though, meaning its contours could change, according to three people familiar with the situation. Officials have also discussed even broader exemptions for all temporary guest workers, not just for those working in agriculture.

Whatever order Trump issues will have significant political ramifications. Cutting off all immigration would bolster Trump’s standing with his hard-line conservative base, but anger the business community, which wants Trump to ease restrictions on temporary worker visas. Conversely, if Trump chooses to exempt any temporary workers from his immigration ban, he’ll bolster his standing with the business community but risk creating a backlash among his more conservative base.

Trump kicked off speculation about his intentions Monday with a late-night tweet proclaiming: “In light of the attack from the Invisible Enemy, as well as the need to protect the jobs of our GREAT American Citizens, I will be signing an Executive Order to temporarily suspend immigration into the United States!”

The tweet did not indicate what specific action Trump would take: He could simply suspend entries for a period of time, or cancel a specific program for the year. The White House did not offer clarity when it issued its first official statement on the issue Tuesday morning.

“President Trump is committed to protecting the health and economic well-being of American citizens as we face unprecedented times,” said White House press secretary Kayleigh McEnany. “As President Trump has said, ‘Decades of record immigration have produced lower wages and higher unemployment for our citizens, especially for African-American and Latino workers.’ At a time when Americans are looking to get back to work, action is necessary.”