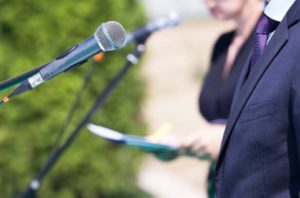 House Republican leaders’ plan was for President Trump to meet with House Republicans at the Capitol on Tuesday night, for him to tell them that their “compromise” immigration bill was the greatest bill in legislative history and that he would sign it with a tremendous pen, and for the president to provide the assurances members have been looking for since last week, when he said he “certainly” would not sign it.

So. Did President Trump explicitly and proudly endorse this immigration bill negotiated by moderates and conservatives, the only one of the two the House will vote on this week that has a chance to pass?

“I guess,” North Carolina Rep. Walter Jones told reporters. He found it “hard to follow everything [Trump] says. He’s kind of like a bouncing ball.”

New Jersey Rep. Leonard Lance, when asked whether Trump endorsed the bill, said sure, but that was only his “understanding” of what Trump did.

Even Florida Rep. Carlos Curbelo—one of the principal moderates who negotiated the bill—couldn’t say squarely that Trump said he would sign the measure. Instead the congressman said that Trump “indicated” he would and, later, that Curbelo was “pretty sure” he would.

“It wasn’t unequivocal, ‘this is the greatest bill ever,’ ” Ohio Rep. Warren Davidson, a member of the conservative Freedom Caucus, said. “It was, ‘this is better than nothing.’ ”

“He said we need to pass the bill. A bill,” Pennsylvania Rep. Ryan Costello said.

Rep. Mario Diaz-Balart, at least, heard a firm endorsement of the compromise measure. It’s not clear, though, whether Diaz-Balart heard this before or after Trump said that he likes him better than his brother, Jose Diaz-Balart, the Telemundo and NBC News anchor.

Such asides from Trump more accurately reflected the general tenor of the meeting than the president’s slippery enunciation of his immigration policy preferences did. Like Walter Jones, many members were confused about what the president did or didn’t endorse in part because they couldn’t keep up with Trump’s rambling about North Korea, trade, the tax bill, Mario Diaz-Balart’s cable-news brother, and occasionally immigration.