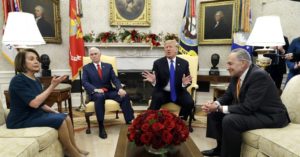 Neither Mexico nor Congress is willing to pay for his promised border wall. His proposal to rewrite laws to limit illegal and legal immigration has so far failed to gain traction on Capitol Hill. And after a drop in apprehensions at the southern border in fiscal 2017, there was an increase of 25 percent in fiscal 2018.

On the political front, Trump made immigration the centerpiece of his case to voters in the November midterms — and watched Democrats win their biggest House victory since the post-Watergate class of 1974. Of the Republicans who held onto their seats, Rep. Will Hurd is the only one who represents a district along the southern U.S. border, and he opposes the wall.

Now his government, with Republicans still in control of the White House and both chambers of Congress, is on the verge of a partial shutdown over his insistence that a year-end spending bill include $5 billion for a border wall that lacks sufficient support within his own party.

None of this has escaped the notice of Trump’s friends and foes in the raging debate over an issue he put at the forefront of his political identity from the moment he launched his presidential campaign in 2015.

“Instead of winning, we’re getting whining,” conservative commentator Ann Coulter wrote last month in a column excoriating Trump for what she predicted would be his capitulation in funding the government without getting money for the wall. “Without a wall, he will only be remembered as a small cartoon figure who briefly inflamed and amused the rabble.”

Even as his prospects of winning keep thinning — Democrats will take control of the House in January — Trump keeps throwing chips on the table. Now, he’s staked his policy legacy, his own political fortunes and those of fellow Republicans, and the continuing operations of several government agencies on getting a $5 billion jump on building the wall.