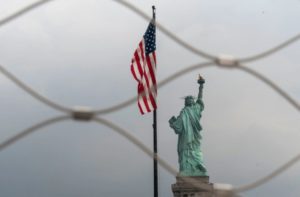 On Monday, the Supreme Court lifted a lower-court stay on a Trump Administration rule that will deny permanent-resident status to legal immigrants who are deemed likely to become “public charges,” because they have in the past—or may in the future—receive public assistance, such as Medicaid or Social Security supplemental income. The rule has been called a humanitarian catastrophe, an act enabling racist and classist cruelty, and a throwback to the darker days of rejecting the neediest immigrants, be they Irish, Jewish, queer—or nonwhite. It is all of those things, but it is not, contrary to many comments, a drastic change in immigration policy. Like much that is Trumpian, the new rules, and the Supreme Court order allowing them to go forward, build logically on the last few decades of the American political conversation on immigration, race, and class.

In August of last year, Ken Cuccinelli, then the acting director of U.S. Citizenship and Immigration Services, quipped in an NPR interview that the guiding principle of American immigration policy is “give me your tired, your poor who can stand on their own two feet and who will not become a public charge.” He was telling the truth. U.S. policy has always hewed closer to his rendering than to the original Emma Lazarus poem that adorns the pedestal of the Statue of Liberty. The “public charge” exclusion in immigration law goes back to the middle of the nineteenth century, and the underlying fear that newcomers will take what is rightly “ours” predates the policy by centuries.

The immediate precursor of the Trump Administration rule is the Personal Responsibility and Work Opportunity Reconciliation Act, the welfare-reform law signed by Bill Clinton, in 1996. Clinton had run on the promise to “end welfare as we have come to know it,” and he did. On its way through Congress, the reform package acquired provisions that effectively threw most noncitizens, present and future, off most federally funded public-assistance programs. Clinton opposed these amendments. In his speech heralding the passage of welfare reform, he said:

I am deeply disappointed that the congressional leadership insisted on attaching to this extraordinarily important bill a provision that will hurt legal immigrants in America, people who work hard for their families, pay taxes, serve in our military. This provision has nothing to do with welfare reform. It is simply a budget-saving measure, and it is not right.