Home Federal Enforcement Trump’s Asylum Policies Sent Him Back to Mexico. He Was Kidnapped Five Hours Later By a Cartel 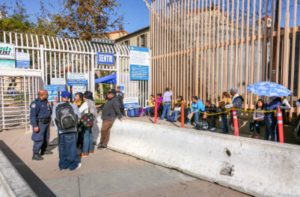 NUEVO LAREDO, Mexico — David wept as U.S. immigration agents marched him and his child across the bridge into Mexico. “They say here in this country, where we are, they kidnap a lot of people,” he said.

They didn’t even last the night. Hours later and just three miles away, cartel members surrounded David and a dozen other migrants at a bus station. They were forced into trucks, and abducted.

David is among the estimated 42,000 asylum seekers who’ve been returned to Mexico in recent months under President Trump’s new asylum policies. The Trump administration calls the policy “Migrant Protection Protocols,” but far from offering protection, the policy has led to a brutal wave of kidnappings in some of Mexico’s most dangerous border cities.

Powerful criminal organizations have seized on Trump’s changes, targeting asylum seekers with family in the U.S. by holding them hostage until their relatives come up with thousands of dollars to pay for their release.

VICE News spoke with multiple asylum seekers who have been kidnapped or narrowly escaped being kidnapped upon being returned to Mexico. All of them said they suspected Mexican immigration officials were working in coordination with the cartels. Often, they were grabbed at the bus station or along the three-mile stretch from the Mexican immigration office to their shelter. The stretch between the border and the shelters may be a few miles, but it is among the most dangerous part of a migrant’s journey.

“[The U.S. agents] told us they were going to bring us to a shelter,” David told VICE News, a few hours before he and his child were kidnapped. “They lied.” VICE News has changed names and withheld certain details of David’s story to protect the identity of him and his family.