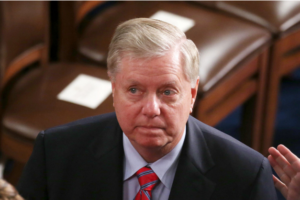 President Donald Trump will consider protecting Dreamers who came to the country illegally as children as part of a larger immigration deal later this year, thrusting the contentious issue into the heart of election season, according to five people familiar with the situation.

Trump told Republican senators at the White House Thursday that he will punt on a proposal until after an upcoming Supreme Court ruling that could overturn the temporary protections for Dreamers the Obama administration implemented, known as the Deferred Action for Childhood Arrivals program.

During a White House meeting on Thursday, Trump told Republican senators that he wants to get something done to address “the underlying problem,” but only after the ruling, said Sen. Lindsey Graham, chairman of the Judiciary Committee and a close Trump ally who attended the gathering.

“The take away for me is if the court rules in the president’s favor, we’re not going to allow these folks to have their lives turned upside down, but we will try to put together a package that protects the DACA population,” Graham said, adding the package will also address “how the system is so broken.”

Trump has tried for years to use protections for Dreamers to try to strike an immigration deal with Democrats in exchange for his more hardline immigration priorities but all his attempts have failed.

Most of the senators are considered hardliners who have opposed such efforts in the past. Perdue has been pushing the White House to expand the number of temporary foreign workers in the United States.

Graham, who has long pushed for a massive rewrite of the nation’s immigration laws, presented Trump with a series of proposals, including those that would protect all immigrants eligible for DACA — a greater number than the 700,000-plus who had been enrolled in the program. But Trump was more in line with Hawley, Cruz and Cotton, who pushed for him to wait until after the Supreme Court ruled, likely in June, five months before Election Day, when the appetite for a bipartisan plan may not be particularly strong.