Home Politics Trump struggles to win over Republicans on immigration 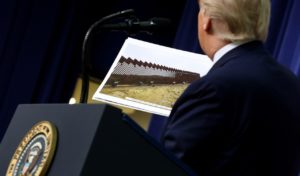 In May 2019, President Donald Trump unveiled a much-anticipated proposal to overhaul America’s immigration system and launched a quiet campaign to build support.

It’s gone nowhere — and few believe it ever will.

The White House is still regularly holding meetings with lawmakers, business leaders and activists about its 600-page bill. But none of them sees any hope for it to pass. Some outright oppose the efforts. And no one has stepped forward to introduce the legislation, in part because the White House insists on retaining control over any changes, according to three people familiar with the situation.

Within the administration, a divide remains over the offering — one Homeland Security official mocked it as a “silly bill.” Outside the administration, some of the once-sympathetic immigration activists are taking the rare step of opposing the White House’s efforts through TV ads and email blasts. Even business groups that broadly support the thrust of the bill prefer more narrow legislation that has a better chance of passing.

“The substance is flawed because it doesn’t address the most important reforms that the president’s supporters want to see,” said Jessica Vaughan, director of policy studies at the Center for Immigration Studies, which favors strict immigration restrictions, and has been in touch with the White House on the proposal. “The strategy is flawed because they are trying to do too many things.”

Yet even with impeachment bruises still fresh and the 2020 election looming, the White House has no plans to slow its behind-the-scenes overtures to lawmakers and interest groups.

“The strategy is flawed because they are trying to do too many things.”

– Jessica Vaughan, director of policy studies at the Center for Immigration Studies.

Trump, who has made immigration a top priority of his presidency, plans to push an issue that has long confounded Washington as he runs for reelection over the next nine months. With the impeachment trial behind him, Trump will soon determine whether to push for the bill this year or in a potential second term, according to a White House official.