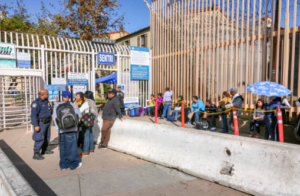 The Trump administration will admit no more than 18,000 refugees over the next fiscal year – the lowest number since the US began its refugee program in 1980.

More than 350,000 people are expected to seek asylum over the next year, the state department said in a press release, but it added that “the current burdens on the US immigration system must be alleviated before it is again possible to resettle large number of refugees [sic]”.

Last year, the Trump administration set the cap at 30,000 – which at the time was historically low, and a significant reduction from the 110,000 asylum seekers allowed during Barack Obama’s final year in office.

Through an executive order, Donald Trump will also “ensure that newly-arrived refugees are placed in communities where state and local governments are best-positioned to receive them”, according to the State Department.

The policy of admitting is in line with the Trump administration’s goals of all but ending the United State’s refugee program and its status as a leader in accepting people fleeing persecution around the world.

“This is a very sad day for America,” said David Miliband, the CEO of the International Rescue Committee, in a statement. “Refugee Resettlement is an essential lifeline that the US provides for the most vulnerable refugees at a time of unprecedented global crisis.”

This fiscal year, the US admitted about 29,800 refugees, nearing the annual ceiling.

A lower cap will allow the homeland security department to better address “the ongoing crisis at the southern border” and aid in “reducing a staggering asylum backlog that unfairly delays relief for those with meritorious claims”, said Kevin McAleenan, the acting head of the department.

But critics say that the administration is purposely delaying processing cases. A backlog of more than 800,000 asylum cases are stuck in the immigration courts, and the number of pending cases increased by about 50% since Trump took office.

By Maanvi Singh for THE GUARDIAN
Read Full Article HERE