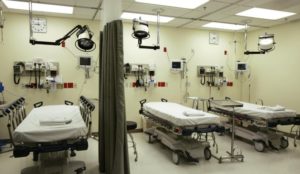 Then on Oct. 4 U.S. President Donald Trump changed the rules she and others had been complying with: Trump signed a proclamation requiring all prospective immigrants to prove they will have U.S. health insurance within 30 days of their arrival or enough money to pay for “reasonably foreseeable medical costs.”

The new requirement, part of Republican Trump’s hard-line policies on immigration, goes into effect on Nov. 3 and prospective immigrants are scrambling to figure out how to get the necessary coverage, navigating a complex healthcare bureaucracy that has, for the most part, not previously catered to those who are not yet in the country.

The administration gave scant detail about how the new requirements would be implemented beyond a bullet-point list of the types of insurance plans that would be accepted.

A State Department notice on Oct. 29 said consular officers will verbally ask immigrant visa applicants to identify a specific health insurance plan, the date coverage will begin, and “other information related to the insurance plan as the consular officer deems necessary,” but gave the public only two days to comment on that plan instead of the usual several months.

Lopez, 40, who works as a family assistant in California, and many others are finding few options exist for them.

Lopez received a letter for her parents’ appointment to be interviewed on Nov. 25 at the U.S. embassy in Guatemala. Near the top it read: “inability to meet this requirement will result in the denial of the visa application,” according to the letter seen by Reuters.

She immediately called her own insurer, Kaiser Permanente, but she said she was told her parents, both in their 60s with no serious health problems, would not be eligible because they did not have U.S. social security numbers and even if they did, it would cost more than $1,600 a month to cover both of them, according to interviews with Lopez and her attorney.

Lopez then called five other insurers and began to panic when they all told her variations on the same thing, she said.

Tony Barrueta, a Senior Vice President at Kaiser Permanente, said in a statement that a social security number is not required to apply for Kaiser Permanente coverage, but the company may request that information.