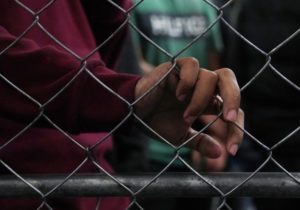 WASHINGTON/MEXICO CITY (Reuters) – U.S. President Donald Trump’s administration pushed ahead with its attempts to crack down on migration at the southern border on Monday, defending in court a virtual ban it imposed on asylum seekers and issuing its second sweeping order within a week.

A U.S. district judge in Washington heard arguments about whether to temporarily strike down the first new rule, which is designed to bar almost all immigrants from applying for asylum at the country’s southern border.

The Trump administration unveiled the rule a week ago as part of an effort to end what it has called fraudulent asylum claims from an increasing number of migrants, mainly from the impoverished and violence-plagued Central American countries of Guatemala, Honduras and El Salvador, who pass through Mexico on their way to the United States.

Judge Timothy Kelly in the U.S. District Court for the District of Columbia withheld ruling on whether to issue a temporary restraining order to block the rule on asylum seekers pending a trial, saying he would make that decision soon.

Justice Department lawyer Scott Stewart told the judge that a temporary restraining order would prompt a dangerous surge on the border from migrants seeking to get into the United States while the case was being heard.

The suit was brought by the Capital Area Immigrants’ Rights Coalition. The American Civil Liberties Union (ACLU) has filed a similar suit in federal court in California, due for a hearing on Wednesday.

As the asylum rule faced its first court fight, the Trump administration on Monday unveiled a new regulation that would order expedited deportations for tens of thousands of people who could be deprived of a review by an immigration judge.

“For the past two and half years there has been one attack after another on immigrants but the pace has increased beyond anything we have seen just in the past few weeks,” said Lee Gelernt, deputy director of the ACLU’s Immigrants Rights Project.

Ahead of a presidential race in 2020, Trump is seeking to show voters he has carried out pledges to take a tough stance on illegal immigration. Voters sent him to the White House in a 2016 campaign in which he promised to build a border wall and ban immigrants from predominantly Muslim countries.