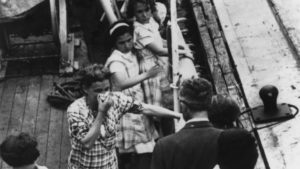 During the Nazi era, roughly 300,000 additional Jewish refugees could have gained entry to the U.S. without exceeding the nation’s existing quotas.

The primary mechanism that kept them out: the immigration law’s “likely to become a public charge” clause. Consular officials with the authority to issue visas denied them to everyone they deemed incapable of supporting themselves in the U.S.

It is not possible to say what happened to these refugees. Some immigrated to other countries that remained outside Germany’s grip, such as Great Britain. But many — perhaps most — were forced into hiding, imprisoned in concentration camps and ghettos, and deported to extermination centers.

The Trump administration is now resurrecting “the public charge” clause as a way to limit legal immigration without changing immigration law. On Aug. 12, U.S. Citizenship and Immigration Services announced new regulations that will deny admission to those unable to prove under tough new standards that they won’t claim government benefits.

As someone who has studied European Jews’ attempts to escape Nazi persecution and immigrate to the U.S., the administration’s evocation of the public charge clause is chilling.

The public charge clause stretches back to an 1882 act, which was then incorporated into a 1917 law, that spelled out the classes of aliens who could be excluded from the U.S., including “persons likely to become a public charge.”

For the first five decades, the public charge provision barred few people, basically only those unable to work due to physical or mental handicaps.

After the 1929 stock market crash and the ensuing Great Depression, the Hoover administration sought to combat unemployment by reducing the number of immigrants. But it didn’t want to change the recently implemented Immigration Act of 1924 that set annual overall and country-by-country quotas.

In September 1930, the State Department issued a press release that told consular officials that they “must refuse the visa,” to anyone they believed “may probably be a public charge at any time.” The instructions achieved the desired effect. Within five months, only 10% of the quota slots allotted to European immigrants had been filled.