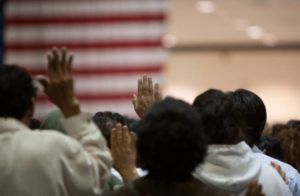 As the coronavirus spreads around the world, the Trump administration has steadily choked off most avenues for legal immigration to the United States — effectively shutting down the system that brings in hundreds of thousands of immigrants annually.

In a span of four months, people who legally migrated to the United States — or are trying to — have had their lives uprooted amid a litany of changes attributed to the pandemic. The abrupt changes have left immigrants and their families in limbo — confused, frustrated and scrambling to sort out their next steps.

The reasons provided by the Trump administration vary, from protecting American workers at a time when the unemployment rate is high to putting public health first.

This week, the futures of more than 1 million international students attending universities in the US became uncertain. Immigration and Customs Enforcement announced on Monday that foreign students taking online-only courses — which are becoming more common as universities move away from in-person classes amid the pandemic — may need to transfer schools or leave the US.
Among them was Shreeya Thussu.

For three years, the 21-year-old senior at the University of California at Berkeley lived and studied in the United States. Now the place she calls home could deport her, depending on her university course load.

“We don’t really know what’s happening. Everyone’s trying to find ways that we can schedule an in-person class, but there’s not many options,” Thussu, who serves as the president of the International Students Association at Berkeley, told CNN.

Just a few days ago, companies and foreign workers went through a similar state of worry, while many of the people trying to come to the US on green cards learned that won’t be a possibility for the rest of the year. And before that, the Trump administration largely barred migrants, including children and asylum seekers, from entering the US.