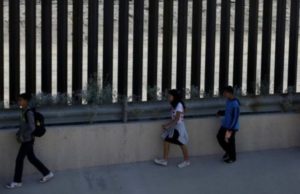 The US Supreme Court has given the go-ahead to Trump administration plans that severely limit the ability of migrants to claim asylum.

Under the rule, people arriving via a third country must claim asylum there first before arriving at the US border.

Legal challenges against it continue but the ruling means for now it can be enforced nationwide.

President Donald Trump tweeted that it was a “BIG United States Supreme Court WIN for the Border on Asylum!”.

The US border in seven charts
Is there a crisis on the US-Mexico border?
Curbing migration to the US has been a key goal of his presidency and forms a major part of his bid for re-election in 2020.

When it was unveiled this year in July it was almost immediately blocked from taking effect so the move is being seen as a victory for the Trump administration in US media.

What do the changes mean?
Migrants from Central America travel north, often on foot, through Mexico until they reach the US border. Many of those arriving are fleeing violence or poverty.

In practice, the changes mean that migrants from Honduras, Nicaragua and El Salvador must first claim asylum in a neighbouring country or Mexico. But it affects people from beyond the region too.

The American Civil Liberties Union, which challenged the ruling, argued it drastically limited those eligible for asylum.

“The current ban would eliminate virtually all asylum at the southern border, even at ports of entry, for everyone except Mexicans,” it said in a petition.

Anyone who has been rejected by a third country or is a victim of human trafficking can still apply.

Why is this controversial?
The policy overturns long-standing convention that the US hears asylum claims however people have arrived at the border.