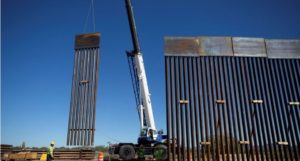 President Trump had been on a winning streak on immigration, but that progress is suddenly imperiled after a series of court setbacks and the departure of acting Homeland Security Secretary Kevin K. McAleenan, the architect of much of the recent success.

Mr. Trump announced that Mr. McAleenan was out Friday evening, capping off a day that saw three different judges rule against the president on immigration.

One federal court in Texas erected a new hurdle to Mr. Trump’s wall building plans, ruling the border emergency proclamation the president issued in February — which he’s using to siphon Pentagon money toward the wall — is illegal.

Federal judges in New York and California also ruled against Mr. Trump’s new policy cracking down on immigrants who are in the U.S. illegally and use public benefit programs such as Medicaid, finding that he not only cut too many procedural corners but was likely breaking immigration law, too.

Judge George B. Daniels, a Clinton appointee on the court in New York, said the policy’s attempt to reward would-be immigrants who spoke English was “simply offensive,” and said the other new tests have “absolutely no support in the history of U.S. immigration law.”

“The rule is simply a new agency policy of exclusion in search of a justification. It is repugnant to the American Dream of the opportunity for prosperity and success through hard work and upward mobility,” he wrote.

He ordered a nationwide halt to the “public charge” policy, which was to take effect this week.

Another judge in California issued a similar, though more limited ruling on the same topic.

The public charge rule, which Mr. McAleenan and acting Citizenship and Immigration Services Director Ken Cuccinelli had pushed through earlier this year, was supposed to be a marquee move in Mr. Trump’s effort to try to limit the drain some legal immigrants pose on taxpayers.