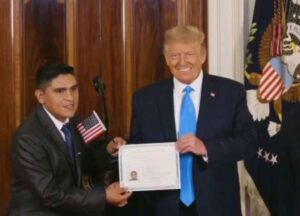 President Trump participated in a surprise naturalization ceremony at the White House on the second day of the Republican National Convention, using the process as a way to highlight legal immigration to the U.S.

“You followed the rules, you obeyed the laws, you learned our history, embraced our values, and proved yourselves to be men and women of the highest integrity,” Trump said during the ceremony, footage of which aired during the convention on Tuesday night. “It’s not so easy. You went through a lot. And we appreciate you being here with us today.”

The president said that there was no higher honor than American citizenship, and he was honored to be their president.

“You’ve earned the most prized, treasured, cherished, and priceless possession anywhere in the world, Trump said. “It’s called American citizenship. There is no higher honor and no greater privilege. And it’s an honor for me to be your president.”

The president then personally introduced the group of five individuals, touting their personal and professional accomplishments.

Trump told the new U.S. citizens that they were now stewards of “this magnificent nation” and part of a family that was “comprised of every race, color, religion and creed united by the bonds of love.”

The ceremony was interspersed between traditional convention speakers, including two of Trump’s children, Tiffany and Eric, and his wife, Melania.