Home Congress & Federal Laws Trump has bulldozed over Congress on immigration. Will lawmakers ever act 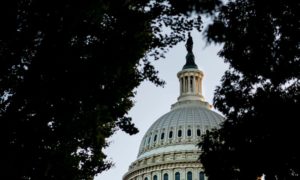 Republican lawmakers seem to be having self-esteem issues.

The legislature, after all, is an equal branch of government with constitutionally granted powers. Lately, nearly all of those powers have been siphoned off by the president and his team of unelected bureaucrats. Yet, again and again, GOP lawmakers meekly submit to this constitutional castration.

To wit: Congress’s power of the purse? Gone. Regardless of how much money Congress appropriates for, say, a border wall or military aid to Ukraine, President Trump has made clear that he’ll ignore the number and pencil in his own.

Congress’s power to regulate commerce with foreign nations? Hijacked by a president who cites bogus “national security” rationales to impose tariffs whenever he likes.

Congress’s duty to “advise and consent” on major appointments? Cabinet and other senior government posts that require Senate confirmation have been atypically littered with “acting” officials instead. In fact, while immigration is ostensibly the president’s signature issue, Trump hasn’t had a single Senate-confirmed director of Immigration and Customs Enforcement since he took office. And though Democratic lawmakers may complain, nothing will change as long as Republicans control the Senate.

Which brings me to the most significant power Trump has stripped from Congress: its lawmaking authority. This is best illustrated by the administration’s actions basically rewriting immigration law wholesale, with nary a peep from GOP legislators.

Sure, on some immigration matters, Congress has relinquished its responsibilities, effectively giving Trump the ability to contort immigration policy as he sees fit.

Consider the “dreamers,” the young immigrants brought here as children who know no other country than the United States. They have long been in a legal limbo. Congress could resolve that limbo swiftly and easily by granting the dreamers permanent legal status and a pathway to citizenship. This would have the support of majorities of voters from both parties, and the Democratic-controlled House has already passed such legislation.