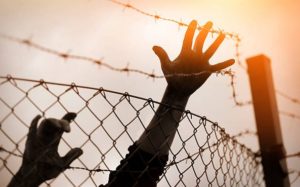 A deal needs to be bipartisan, but the meeting wasn’t.

WASHINGTON ― President Donald Trump, Vice President Mike Pence and a group of Senate Republicans congratulated themselves Thursday for meeting to discuss a problem Trump created four months ago when he put hundreds of thousands of undocumented young people at risk of deportation.

“What we did today, which I think was truly a breakthrough, is we saw the president assume leadership on this issue,” Sen. Thom Tillis (R-N.C.) told reporters after the meeting, adding that Trump “already has” shown leadership on delivering a message on immigration to the public.

Tillis and other attendees insisted the White House gathering signaled progress toward a compromise on young undocumented immigrants who came to the U.S. as children and now fear removal because Trump ended the Deferred Action for Childhood Arrivals program. But they came out of the meeting with few details about what Trump wants, beyond what he’s already tweeted. And the meeting came two months after bipartisan negotiations began in the Senate — negotiations Trump has mostly stayed out of.

Any deal on DACA will require Democratic support, in part because some of the Republicans involved in Thursday’s meeting have opposed proposals that give legal status to undocumented immigrants. The Republican senators who attended the meeting were John Cornyn (R-Texas), Chuck Grassley (R-Iowa), Tom Cotton (R-Ark.), Lindsey Graham (R-S.C.), James Lankford (R-Okla.) and Tillis — of them, only Graham is still heavily involved in talks with Democrats on Dreamers. No Democrats were invited to Thursday’s meeting.

Thursday’s meeting at the White House for that very reason.

“I have no interest in attending any more Republican-only meetings on DACA,” Flake told reporters. “It’s counterproductive. This has to be a bipartisan bill.”

Trump will hold a bipartisan meeting on immigration next week, the White House announced on Thursday. But so far, the administration hasn’t been involved much in bipartisan talks on a DACA deal. White House Chief of Staff John Kelly met with a bipartisan group of senators to discuss the issue before Christmas, promising a “punch list” of specific demands that still hasn’t come.