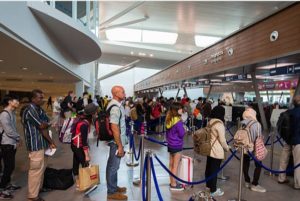 WASHINGTON — President Trump said Tuesday that several thousand Liberians who have been living in the United States under a temporary immigrant status will have one year to return to their country or they will face deportation.

The president said in a memo to the secretary of state that he was formally ending a program that has allowed Liberian immigrants to remain in the United States and work legally since 1999, when President Bill Clinton established it in response to conditions in the country after a civil war.

More than 800,000 Liberians were displaced by the war and fled the country. Some sought refuge in the United States.

The program, known as Deferred Enforced Departure, has been renewed for Liberians since, giving the immigrants the ability to remain in the United States without fear of deportation. But in the memo, Mr. Trump cited the improved conditions in Liberia as evidence that the program was no longer needed.

“Liberia is no longer experiencing armed conflict and has made significant progress in restoring stability and democratic governance,” Mr. Trump wrote. “Liberia has also concluded reconstruction from prior conflicts, which has contributed significantly to an environment that is able to handle adequately the return of its nationals.”

Advocates for Liberians in the United States had urged Mr. Trump to simply extend the protections. Members of Congress from Minnesota, which has the largest Liberian population in the country, wrote a letter to Mr. Trump this month to echo those requests.

“Many of these people have been in our state for decades, and they are an important part of our communities, where they serve as business owners, teachers and health care workers,” the lawmakers wrote, asking for an extension of the program.

On Tuesday, Emira Woods, a Liberian-American advocate for immigrants, described the president’s decision as a mixed bag. She noted the year that Liberians have before facing deportation, but said ending the program would force them to abandon lives in the United States. “Many of these Liberians had children in the United States,” she said.